What is Object-oriented Programming?

What is Object-oriented Programming?

Object-oriented programming (OOP) is a computer programming model that organizes software design around data or objects rather than functions and logic. An object can be defined as a data field with unique attributes and behavior.

What is the nature of object-oriented programming?

The structure or building blocks of object-oriented programming include:

Classes are user-defined data types that act as blueprints for individual objects, attributes, and methods.

Objects are instances of a class created with specially defined data. Objects can correspond to real-world objects or an abstract entity. When the class is initially defined, the only object defined is the definition.

Methods are functions defined within a class that define the behavior of an object. Each method in class definitions begins with a reference to an instance object. Additionally, subroutines contained in an object are called instance methods. Programmers use methods to keep reusability or functionality encapsulated in one object at a time. 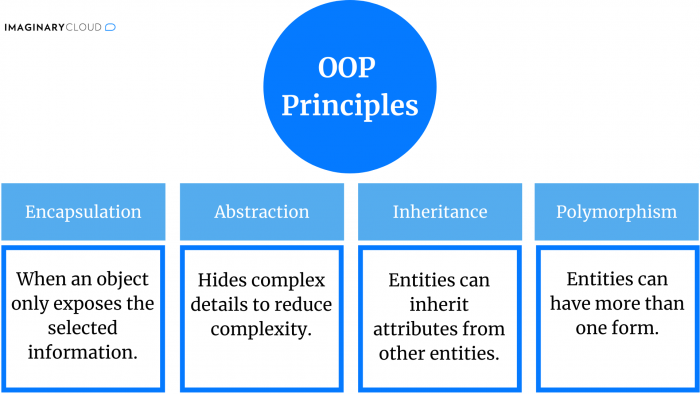 What are the basic principles of OOP?

Object-oriented programming is based on the following principles:

Encapsulation. This policy states that all important information resides inside an object and only certain information is exposed. The implementation and state of each object is kept private within a defined class. Other objects do not have access to or permission to make changes to this class. They can only call a list of public functions or methods. This feature of data hiding provides greater program security and prevents unwanted data corruption.

Abstraction. Objects hide unnecessary application code by only revealing the internal mechanisms involved in using other objects. The functionality of the derived class may be extended. This concept can more easily help developers make additional changes or additions over time.

Heritage. Classes can reuse code from other classes. Relationships and subclasses between objects can be assigned, allowing developers to reuse common logic while maintaining a unique hierarchy. This feature of OOP forces a more thorough data analysis, reduces development time, and provides a higher level of accuracy.

Polymorphism. Objects are designed to share behaviors and can take multiple forms. The program will reduce the need for duplicating code by determining what meaning or usage is required for each execution of that object from a superclass. A subclass is then created, which extends the functionality of the superclass. Polymorphism allows different types of objects to pass through the same interface.

The OOP language allows splitting the program into bit-size problems that can be easily solved (one object at a time). The new technology promises greater programmer productivity, better software quality and lower maintenance costs. OOP systems can be easily upgraded from small to large systems.

I am a 4th year computer engineering student at Cukurova University. Interested in web development and software testing.

What is an Algorithm? The SOLID Principles of Object-Oriented Programming
Light